My daughter The Elf is a tough li’l girl. At fourteen-going-on-forty, she has, over the last year, become the exact opposite of the emotional, sullen stereotype (except for the language. What a mouth that girl has…). But I think her hard-won maturity is working against her at the moment, and I feel absolutely unable to help.

She starts high school in a few days. And I can tell: she’s absolutely terrified. She’s not sleeping. She’s not eating. And this is a girl who loves to eat and sleep. Without end and with much enthusiasm. She did emerge at around four in the morning to very quietly confess to me (as I recall) that she was very nervous about Opening Day, and nothing I said seemed to help at all. 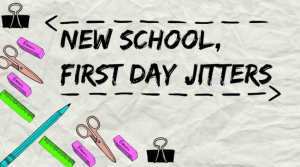 I know — at least I hope — that two days after she gets there, she’ll be fine. But I want to be able to help her now, to do something other than mouth the standard (and, it seems to me, rather dismissive) clichés: “Oh, it’s just nerves,” “Oh, it’s not that bad,” and of course my classic all-purpose, “You know, on my first day of school…”

So “Mom”? “Daughter”? Any advice? I don’t want to dote, but I don’t want to abandon her either. How can I help her through this, ’cause somehow just being stoic isn’t cutting it.

So, telling her about your first day isn’t such a terrible idea. Or you could just wait it out because in a few days she’ll be feeling happy and excited and like she knows everything about high school. And that will be awesome. 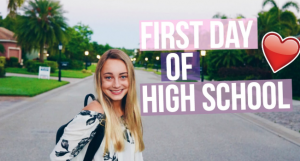 I have to admit that I started to think about how to answer “dad’s” query before I saw Rach’s response. My suggestions were going to be dramatically different than Rach’s. I was thinking along the lines of “sit down with her and have her really try to dissect what it is that she is so nervous about and then deal with that rationally.” But, when I saw Rach’s response, I thought “well, she is a heck of a lot closer to this than I am, maybe I am way off base here.” So, I asked my own kids at the dinner table tonight.

My thirteen-year-old, who is starting eighth grade was quick to point out that she is closer in age to the Elf than anyone else voicing an opinion. She agreed with Rach – distract her. Although, I think that in my daughter’s mind distraction equated to ‘take her shopping and buy her lots of new stuff’. My son, who is a junior in high school this year suggested that the Elf’s older sister might be a better person to talk with her. Although, he did add the caveat that his suggestion would only work if they get along with each other better than his sisters do.

Whatever you decide to say or do, I think the fact that she knows that you understand that she’s nervous and that you care is comforting. And, next week when she is too busy texting her new friends to answer your questions about how it’s going, you can rest easy.